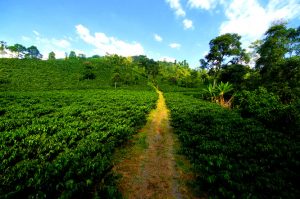 The Coffee Zone is a geographical area that comprises of 3 Colombian departments: Las Caldas, Risaralda and Quindio. The cities of Manizales, Pereira and Armenia. The departments have many things in common including a deep rooted coffee culture, the pre-Colombian history that is more ingrained than the Spanish legacy, its beautiful landscapes the friendliness and hard-working nature of the people. Nevertheless, each has it particularities: Manzales stands out for its cultural life, museums and monuments, Armenia as the heart of the region and for being reconstructed after the earthquake of 1999 and Pereira due to its commercial activity, gastronomy and nightlife.

Most of the coffee production in Colombia is based here and for that reason the region is aptly named the Coffee Zone. The fertile valleys with their seemingly endless coffee plantations, traditional wooden houses with brightly colouored balconies come together to create the typical and vibrant landscape of this region.

The wax palms – the national tree – mark spectacular Cocora valle: other colours can be seen in the region, such as in orchids, heliconias; in birds such as humming birds parrots and butterflies, in the Parc Nacional de los Nevados which reaches altitudes surpassing 5000masl and the beautiful architecture of towns like Salento and Filandia. This region is also united by the beauty and warmth of its people. 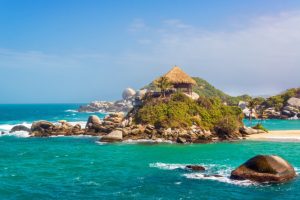 Tyrona national park is located on the Colombian Atlantic coast, a few km from Santa Marta. The park's boundaries extend from just beyond the bay of Teganga to where the Piedras River opens out into the sea. The national park covers an area of 15000 hectares, 75% of which are of land and the remaining are marine. The climate here oscillates between temperate and hot, with an average temperature of 25-30 degrees Celcuis. One of the main entries to the park is found at el Zaino, 34km from Santa Marta, from here one can gain access to the bay's natural beaches, coral reefs, mangroves, mountains and exuberant vegetation found within. Many types of animal inhabit the park, including more than 100 mammal species, 200 birds and numerous reptiles that makes up part of the Sierra Nevada de Santa Marta, a mountain range separate from the Andes that makes for a unique ecosystem that rise up from sea level where there are beaches of fine white sand before passing through tropical forests to snow-capped altitudes of 5770 masl.

In Tyrona national park there are various archaeological sites that prove the existance of ancient cultures, such as the Tyrona city of Chairman or Pueblito, where a community of at least 400 indigenous people thrived in the pre-Colombian period. Today there are still points of interest sacred to the Koguis, Arhuacos and Arsarios people. These tribes are all descented from the ancient Tyrona people who were one fo the most advanced pre-Colmbian tribes to have lived over the centuries in the Sierra Nevada.

From the bay of Cañaveral, a 3 hour hike over a stone pathway leads to Pueblito one of the most well-established Tyrona developments. The beaches of Arrecifes, La Piscina, Cabo de San Juan del Guia and Castilletes are within reach from Cañaveral as well. These beaches are all very distinct, some with still inviting waters, others with turbulent surf and thick with vegetation but all making the visitor feel as if he or she has been transported to another world, one of savage yet paradisical scenery. In the park itself there are many opportunities to enjoy such activities as mini-treks, snorkeling, bird-watching, kayaking biking or just contemplating nature. 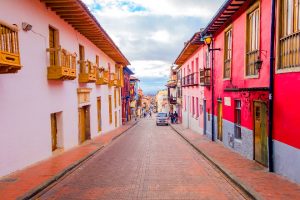 Bogota is the sprawling, chaotic and captivating capital city of Colombia. With around 8 million inhabitants, it's the most important political and financial city in the country. It is situated in the geographical centre of Colombia at an altitude of 2640 masl. on a plateau known as the Sabana de Bogata on the west of the Andes mountains. Bogota's privileged location means that it is blessed with a year-round Spring-like climate where the flowers are always blooming. Bogota has a diverse variety of “barrios” or neighbourhoods: the tall modern buildings are located in an area called Centro Internacional and just behind it you find the bohemian Macarena district, where the Plaza de Torros is located. The historic centre is called the Candelaria and it's the where the colonial city was created. It also holds the seat of government snd Congress. To the north you can find the barrios of La Merced and Teusaquillo which stand out for their distinctly British architecture. The city was founded on August 6th 1538 and was given the name of Santa Fe by the conquistador Gonzalo Jimenez de Quesada, who arrived in these lands in sserach of gold and who defeasted the chibcha indigenous people in Bacata.

Bogota is today a modern city with a bubbling cultural scene and vibrant social aspect. Picturesque with an important architectural heritage, the most impressive collection of pre-Colombian art in the world, unrivalled urban graffiti and fantastic museums. The poverty that lives alongside such wealth form contrasts that make this a fascinating city. 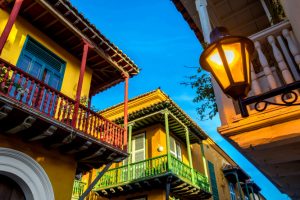 Founded in 1533 on an original indigenous Carib settlement, the Spanish conquistador Don Pedro de Heredia founded the city of Cartagena de Poniente to distinguish it from Cartegena de Levante in Spain. Later the city became known as Cartagena de Indias, a name which remained until the end of the colonial era and the beginning of the Republic. This colonial city rapidly became the gem in the Spanish crown's territories. It was fortified between 14th and 19th centuries and in order to protect it from the continual attacks by foreign buccaneers and pirates and when these fortification were completed it was the most impenetrable and largest in the Americas.

Cartgena was the first province of the Nuevo Reino de Granada which gained it's independence from Spain on 11 November 1811 and the city still boasts architectural treasures in its civil, domestic, religious, military and governmental constructions.

Just walking through its narrow but remarkable streets there is enough to understand why Cartagena is a UNESCO World Heritage site. Perhaps the real joy of Cartagena is exploring its streets on foot, an experience that awakes all 5 senses with a ryhthm of cumbia and mapale, with the flavours of the Caribbean , with blend of the natural world against the variations in architecture, all the while buffeted by the Caribbean breeze, making this city an incredibly romantic destination. The cultural wealth that Cartagena enjoys is a result of the mix in backgrounds of the city's inhabitants and it architectural beauty. And the warm afternoon winds make Cartagena one of the Caribbean's most fascinating cities.